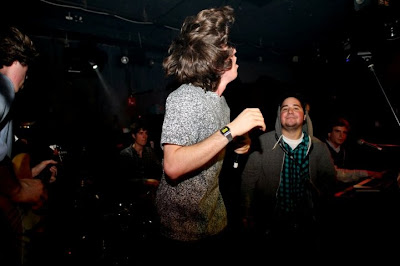 Princeton is a really great, LA based band. I got the chance to see them with Ra Ra Riot in December and they really blew me away. I bought their Bloomsbury EP and fell in love. Even though it is just four songs, it has rarely left my cd player. The band is made up of twin brothers, Jesse and Matt Kivel and Ben Usen. They have toured with a ton of great bands and received a ton of positive praise from multiple music blogs. I got the chance to ask Jesse, who sings and plays guitar, some questions about their Bloomsbury EP and touring.

What was the recording/writing process like for the Bloomsbury EP?
It was tedious and painful. But seriously, it was a very difficult record to record. We had little experience recording the orchestral instruments that appear on the record and did it all ourselves in our house so we just didnt have the space to stretch all of our gear out. We would spend hours in matts bedroom writing flute and string arrangements and only getting maybe one part done in a day. The song writing process on the record was easy though. Two of the 4 songs on the EP were already written before the concept (Leonard Woolf and Ms. Bentwich) and because we were excited about the concept the other tracks came quickly.
Who are your musical influences?
I think we each have our own key influences. To name a few I would have to say The Kinks, John Cale, Jonathan Richman, Sam Cooke, Scott Walker, Arthur Russell

Why did you decide to base the EP on the Bloomsbury collective?
Matt and I were studying various members of the group and decided it would be a better and more attainable idea then recording our full length. We were simply too unorganized at the time to record a full album so an EP was much more manageable.

How would you describe the Los Angeles music scene?

I would say it is fractured. There are so many different types of bands and "scenes" that there is nothing really unifying it. One thing I believe is that LA has some of the friendliest and supportive musicians I have known. Its a great city to meet other musicians who enjoy what they are doing.
Where has been your favorite place to tour?
For me my favorites would be probably portland and San Francisco. Two great cities.
What has been your most memorable show?
My most memorable show would have to be the last show of the Ra Ra Riot tour at the Ottobar in Baltimore. We had three different songs where members of the band came on stage to play with us and it was just a great night.
What was the last album you bought?
I just bought the After Dark compilation on vinyl.
Do you have any guilty pleasures?
Too many to list. At this point I don't even consider them guilty pleasures, I just think of them as me fully enjoying all aspects of my life. It just so happens that these aspects of my life include Dan In Real LIfe, and most of Hugh Grants body of work. That guy is charming.
What are Princeton's future plans?
We plan on releasing a full length sometime this year and enjoying our lives.
Posted by Sarah T. at 6:10 PM