I just thought that I should give a much deserved shout out to my favorite record store, Grimey's New and Preloved Music, in Nashville, TN. It is one of my favorite places and I always walk away with handfuls of new music. The staff is so nice, and not snobbish at all. If you are looking to start listening to a new band, they will direct you to the best album to try first. They are one of the only Think Indie record stores in Tennessee, and carry albums that are very hard to find. Also, the instores are fantastic. Over the past few months I have seen Conor Oberst, an amazing Nashville super group covering the Walkmen, and Chris Thile and Edgar Meyer. They were also named one of Paste Magazine's 17 Coolest Record Stores in America. So, make your way out to 8th Avenue South and say hi to some of the awesome people at Grimey's or even catch an awesome upcoming instore.

http://www.grimeys.com/index.html
Posted by Sarah T. at 9:13 PM No comments:

A Conversation with Our Cat Philip 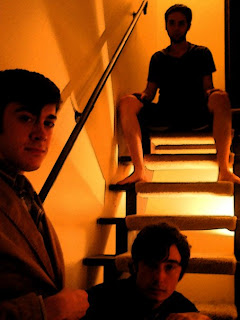 I have been searching my mind to try and find words to describe the sound of Our Cat Philip, a Columbus, Ohio based band. Nick Held, the source of drums/keyboards/vocals, says the band’s favorite definition of their sound is “kindergarten rock”, which is a perfect description of their sound. They just released their first album, “Apart of Someone” in August, and I highly recommend that you download it from their site. I got the chance to talk to Nick and ask him a few questions about the band. Our Cat Philip met at Ohio State University and is made up of Max Sollisch, Jeremy Hendricks, Nick Held, and Emily Ng. As for musical influences, Nick says, “Our music is a byproduct of our musical backgrounds.” Their collective influence is Yo La Tengo, while Max is influenced more in a lyrical sense and he notes Elliot Smith and Conor Oberst as his main influences. Jeremy is influenced by Grandaddy. As for their sound, Nick says, “There are really emotional lyrics and we put this poppy, folky sound behind them.” He also notes, “We are excited to have an emotional response to our music.”
Also, Nick lists the band Couch Forts as one of their favorites to play with in Columbus. “The music scene here is very, very helpful, and is a very close knit community,” Nick says when I asked about the Columbus music scene. Also, one important aspect of Our Cat Philip’s sound is that they do not use electric guitars or even a bass, because the cello takes the place of the bass. Nick says they do not want to limit themselves to one certain instrument. As for most memorable show, Nick said, “The first time we played with Someone Still Loves You Boris Yeltsin. It was such a phenomenal night.” They are currently playing a few shows around Ohio, but they also are all busy with school. Next summer, Nick says, “We hope to go on an extensive tour supporting a national act.” So, download their album, go see a show, and you will love this band as much as I do.

An Interview with Sean Moeller of Daytrotter 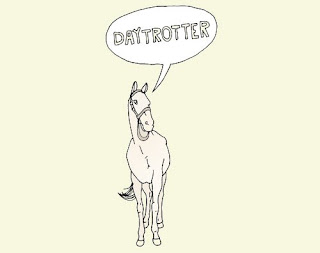 I believe that Daytrotter has been one of the greatest contributions to the indie music world in the past two years. They bring in fantastic bands to their studios in Rock Island, Illinois and record four songs, sometimes those songs are new, unreleased, or covers. They then release these songs to the public for no cost at all. Don’t you wish you would have thought of it? Well, Sean Moeller did think of it. He started it in 2006 and since then there have been many fantastic sessions by bands of many different genres. My favorite sessions have included both Someone Still Loves You Boris Yeltsin sessions, Ra Ra Riot, Death Cab for Cutie, Delta Spirit, Grizzly Bear, Islands, Spoon, and the list goes on and on. I got the chance to interview the man behind Daytrotter and ask him where he got the idea for the site, his most memorable sessions, and what the future of Daytrotter holds.

What were you doing before Daytrotter?

I was working full-time as a sports and entertainment writer for the Quad-City Times, a daily newspaper here in town. I was also doing a lot of freelance music writing for various magazines across the continental United States.

Where did you come up with the idea for Daytrotter?

I think I was out on a run, listening to the Kings of Leon or Ted Leo or something like that when I came up with it. Just thought I could make something happen here in town with our close proximity to all of the big Midwestern cities. I thought it could work. So far, so good.

What has been your most memorable session?

There are way too many to single out. Every band that I invite in, I like so there have been a lot of memorable ones. We have had some really fantastic sessions with Deerhunter, Grizzly Bear, Delta Spirit, Dr. Dog and The Walkmen. There are hundreds more that could and should be mentioned.

Who are your favorite bands that you have not done sessions with?

This would be a long list too. I'd say that I'd love to have Joanna Newsom, Wilco, Kings of Leon, Willie Nelson, Masters of the Hemisphere, Radiohead, TV on the Radio and Brian Wilson in here.

Why did you decide to offer the songs for free?

It just made the most sense. And, doing it that way eliminates a lot of hassle. We aren't trying to be MySpace Music or something like that. We wanted there to be no barrier to people checking out these great bands. We want these to be bands that everyone hears. People are stubborn when it comes to ponying up and not just stealing all the music they can get their hands on.

Why do you think that Daytrotter has blown up like it has?

Have we blown up? I don't really know. I think we're just doing something really true to heart and for the right reasons. We try to do things the right way. I think we have good taste and we do good work. Maybe that's it. Who knows.

What do you like to do in your spare time?

I don't have any spare time. My wife and I have a couple of little girls. That keeps us busy. I do enjoy me some books though. I'm a runner. That's the life.

What is your favorite food?

What has been your favorite concert you have ever been to?

Either when I saw Spacehog play at the Madison Theatre in Peoria, Illinois or when I saw The Darkness play at The Double Door or when I saw Weezer for the first time at First Avenue in Minneapolis. Or...there are great moments at every show I've ever been to. It's sad to me when I go see a great band and the place isn't full. There have been few experiences in my life that compete with the thrill and creative inspiration that I get when I'm at a live show. It's discouraging to think that people would rather stay at home and play video games like lame-o Guitar Hero and Rock Band. Go see a fucking show!! A real show.

What is coming up for Daytrotter?