New Coconut Records album called "Davy" will be out in January 2009. Nighttiming, Jason Schwartzman's music project's first album, is fantastic and if Davy is even half as good as Nighttiming is, I will be ecstatic.
Posted by Sarah T. at 2:15 PM No comments:

Interview with the Spinto Band 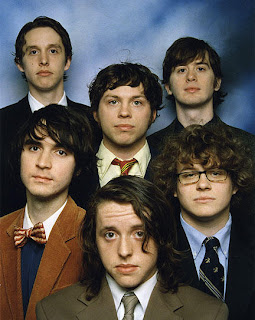 The Spinto band is a wonderful 6 piece from Wilmington, Delaware. They just released their second album, Moonwink, on Park the Van Records. The band is made up of Thomas and Sam Hughes, Jon Eaton, Nick Krill, and Joey and Jeff Hobson. The new album is a follow up to their 2005 major label debut Nice and Nicely Done, although they had previously self released many albums. I had been waiting for Moonwink for a while, and it definitely lives up to all of my expectations. All of the songs are so refreshing and really great, that I can’t pick a favorite, although I am addicted to “Summer Grof”.
I just got the chance to see the Spinto guys for the first time at a Grimey’s in store. They were really nice and their live show was very energetic and fun to watch. They mainly played songs from Moonwink, but also threw in some old favorites, like “Brown Boxes” and “Direct to Helmet”. It was also a great to see the legendary kazoos in action. Jon Eaton, guitarist, was nice enough to answer some questions for me. He talks about the story behind Roy Spinto, touring habits, and recording Moonwink.

What was the recording process like for Moonwink?
Well, it’s a funny coincidence that the album was recorded in a converted sweatshop as we all worked pretty long hours putting the album together. We set deadlines, knew what we wanted and wore sweatpants every now and again. We also gained a fine appreciation for Ms. Pac Man and LA truck burritos. Dave Trumfio (producer) told us many a late night tale of past record industry fiascos to help inspire the process and once or twice we joked about whether veggie burritos were real burritos.
Can you explain the story behind Roy Spinto?
Roy is the inspiration of the band. He blessed us with some song inspiration early in the formation of the band. His face graces many a logo of the band nowadays and sometimes I wonder if he were alive today if he wouldn't anchor a band of his own and we could have a trademark battle for the rights to The Spinto Band name.
What have you guys been listening to lately?
Well.... excellent question. I have been enjoying a few albums of late. Dr. Dog's new album, Fate, is great. I enjoyed the Thao Nguyen album that came out this summer. The new Silver Jews is pretty cool, but I have to admit, I don't really get the new TV on The Radio. We had a discussion the other day that most people say that record is awesome because they are scared to admit that they don't get it. I am not scared, here me now, I don't get that new TV on the Radio album. I think it sounds like an unwound wool scarf.
Where is your favorite place to tour?
Aww shux... I'm no good at picking favorites. Here is a list of cities I've been building that, if I were offered a well paying job there, I would move there... you know, if I were in a career path that created exciting life changing options like that: Madison, Austin, Norfolk VA, New Orleans (despite the potential for disaster), Glasgow, Paris, San Francisco, Portland Maine. Sometimes I want to live in Phoenix, but other times I think otherwise.
What is your favorite song to play live?
See above... Although some of our favorite shows have been in Glasgow Scotland. People are always game for a conga line and once everyone gets drunk you can't understand a single word anyone is saying- and people love to get drunk there, so you pretty much listen to people speak in a foreign tongue, but that tongue is really just drunken Scot.
Any funny stories from tour?
Oh are you kidding me? We are straight business in the Spinto band, the only funny thing ever to happen on tour for us was we misorganized our tax documents and had to refile, but we accidentally refiled using forenames instead of surnames and the files were all screwed up. Crazy story, I'd elaborate, but you kind of had to be there.
Who are your musical influences?
My influences are constantly changing. Today I was listening to a bunch of Ween songs and realized they shaped a large part of my musical upbringing. They helped explain an important point in music and all around existence: anything goes, try new things, do your own thing.
Do you have any guilty pleasures?
Seal and meerkats
Do you have any hidden talents?
Hustling suite upgrades at hotels

How would you describe the Spinto Band's sound?
What can I write that doesn't sound self-obsessed? The Spinto band sound can be described as the final words you write on a postcard before you run out of space. Jam-packed, poignant, and usually overshadowed by the flip-side.
Check out their website:
www.spintoband.com/
And make sure to go out and buy a copy of Moonwink!
Posted by Sarah T. at 4:03 PM No comments: